1. Enable Security Features of Android
1.1 Update Software
Any software has flaws; some will cause a serious security risk. So updating Android OS, either small patches or new versions, is critical to keep your device running up-to-date Android.

You should update Android by either auto setting or manual checking. However, separate vendors update their Android OS under different policies because of the Android ecosystem's diversity. Some have better services and quicker responses to new features and security patches. A list from best to worst of the leading vendors are as follows:
Different devices and types may have different update policies, even for the same vendor. So, Google should be your first choice if you target Android devices because of the security update. You should check both vendor and model for your Android and maximize the priority of up-to-date Android to ensure to be in good shape against cybercrime.

1.2 Lock Smartphone
Lock your Android device is so simple. But, some people still don't do it. In fact, you're more likely to leak your private data, like credit-card accounts, by losing your device than attacking by any malware. So lock your smartphone is a critical security step to keep privacy safe.

What's the best way to lock your phone? Android has some options.
1.3 Only Use Apps from Google Play
The main security risk on Android devices is from apps users downloaded, especially from unreliable third party application sources. Android OS itself is relatively safe, but the apps installed by yourself are another story. To avoid any malware, you should only download apps from Google Play.

Google does its best to make the Store safer than any other app sources. It scans all apps before listing them. We also read reports that bogus apps, including malicious code, occasionally make them into Google Play, but they're exceptions, not the rule.

Besides, if you tune on Google Play Protect, it can automatically scan your Android device for malware when you install programs. For maximum security, you may do as follows. 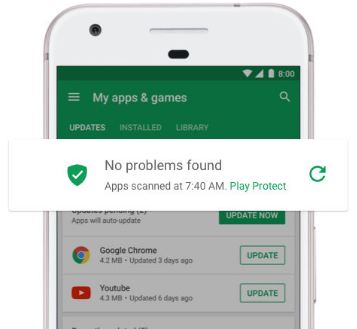 Now that you know the apps from third parties may cause security issues; you need to keep an eye on updating them as long as their vendors have new security patches ready. Most Android software vendors do a good job of security updating, but it costs your time and effort to update them. So, If you're not using an app, get rid of it immediately. It will decrease the chances an attacker can exploit.

1.4 Use Device Encryption
When your smartphone is in others' hands, all your private data are visible to them, either a crook or an agent of US Customs and Border Protection (CBP). Android gives you an option to avoid such a disclosing. To encrypt your device, go to 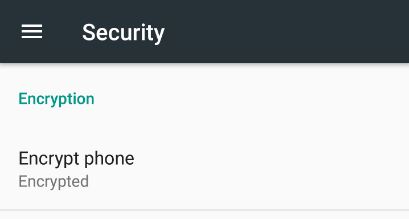 Then, data in your smartphone, like contacts, calendars, and notes, are safe unless you give the password to others.

Now Google comes with one built-in password manager. However, if your devices aren't limited to Google or Android, you can use other password management programs, such as LastPass, 1Password, and Dashlane.

1.6 Turn off Wi-Fi Connections
Wi-Fi is the primary channel by which malware passes your private data. Even if you set a firewall for both inbound and outbound connections, you cannot isolate the Internet risk completely. So, if you're not using Wi-Fi or Bluetooth, turn them off. It will decrease the chances dramatically that cybercriminals attack your smartphone.

Bluetooth hackers are still alive and work similarly to Wi-Fi hackers. So, turn off Bluetooth too. If you don't use it, don't give them a chance. 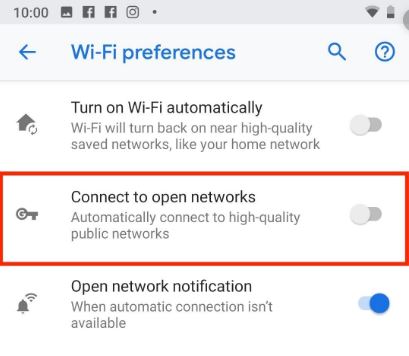 2. 2022 Android Security Software
Android devices span various vendors, distributors, and developers, so they have more complicated security challenges and requirements. For example, public Wi-Fi and third parties' apps sometimes cause security issues in Android devices. It's why more and more companies enter the Android security market. Here we list some of them to help you get extra protection for Android devices.


3. Free Android Security Software
3.1 Free Internet Security Suite for Android
As we mentioned, the apps you downloaded are the primary source of malicious code. If your apps are from Google Play, Google Play Protect does an excellent job protecting your smartphone.

Users cannot guarantee to download apps from Google Play alone, as well as Google Play Protect cannot dig out all malicious code at the first moment. So that employ third parties' Internet security suite is a good option if your smartphone is running lots of apps. The below free list has a good reputation at Android OS.

3.2 Free VPN for Android
When you connect with Wi-Fi, you may not know who the Wi-Fi service provider is. In some cases, your smartphone runs under free Wi-Fi, such as a local coffee shop or public park. It's a huge security risk because the free Wi-Fi providers theoretically can get all the content you communicate through Wi-Fi. You can use free Wi-Fi, but you need extra security protection: it's VPN. Some third parties offer mobile VPN on Android.